Having premiered to more than 30,000 fans at 250 big-screen events across 29 countries from Denver to the Dolomites and Vermont to Verbier, THIS IS HOME is now available online for anyone to watch and share. The film chronicles the unique development and bonds that make a skier, and tells personal stories about the environment that creates and the conditions that helped shape athletes including Candide Thovex, the world’s most famous and acclaimed freeskier, big mountain prodigy Johnny Collinson, 15-year old phenomenon Kelly Sildaru, and freeskiing icon Adam Delorme, among many others. From the icy streets of Finland to chasing powder in Montana and exploring steep lines in Zermatt, and to visiting Thovex’s playground of La Clusaz and a rally session in Verbier, THIS IS HOME profiles the ski community at its finest.

“The response to THIS IS HOME has blown away all expectations, and it has just been amazing to hear from people across the world who loved the story, the skiing, the athletes, the whole thing, and are now fired up to get on their skis wherever they are,” said Alex Hoye, Faction CEO and Co-Founder. “True to our mission of The Faction Collective to do things a bit differently for ski fans everywhere, instead of selling THIS IS HOME we decided to set it free into the wild for the community who made it such a success in the first place. We also wanted to give two people the ultimate THIS IS HOME experience to come ski with us in Verbier and see what it’s all about.”

The Faction This Is Our Home Competition includes airfare, hotels, meals, and lift tickets, and a full Faction ski setup for the two lucky winners to bring home as the ultimate souvenir. Enter to win from December 5, 2017, through mid-January, 2018, at www.thisishome.film.

THIS IS HOME has been nominated for multiple awards by iF3, the Powder Awards, and International Free Ride Film Festival, including Film of the Year, People’s Choice, Best Male Street Segment (Antti Ollila - Finland), and Discovery of the Year (Alex Hall). The film was directed by Etienne Mérel, who also directed Faction’s 4 million-viewed series of webisodes, “We Are the Faction Collective.”

The full-length of THIS IS HOME is available to view today at www.thisishome.film and on YouTube at: https://youtu.be/E3zFEhrcAvU

Enter the Faction This Is Our Home Competition at http://www.thisishome.film.

Access the full THIS IS HOME press pack: https://www.dropbox.com/sh/s1t160iniknqb7r/AABlOz6M59Bkc11xcBlAoSYia?dl=0

What Faction athletes are saying about THIS IS HOME:

Sam Anthamatten:
“It was an honor to share my home mountains with such an amazing team. This is Home shows the support we have from Faction, a ski brand which believes fully in the progression of freeriding. Just watch it! I am sure you will want to go skiing after seeing it!”

Tim McChesney:
"This past season was one of the most fun and busy seasons I have had. I got a chance to ski with a wide variety of skiers from all over the globe that are some of the best in the world at what they do. Getting to go back to my home state of Montana and ski pillows with Delorme and the rest of the crew was definitely the highlight for me. The whole team at Faction worked really hard to make this film happen and I think it's success is going to pave the way for more projects like this to happen in the ski industry."

Johnny Collinson:
“This is Home was an amazing film to have been a part of. It’s a perfect combination of mountains and community, and the people and terrain who shaped us as athletes. Getting to host Sam here in Utah, and then skiing with Sam in Zermatt, was incredible. The film really shows the meaning of home and how it can be anywhere with the right people and doing what you love.”

Giulia Tanno:
“This is Home was an amazing film to have been a part of. It’s a perfect combination of mountains“What a blast to ride with so many cool people who also happen to be amazing athletes. This is Home captures the culture and shows the many different styles out there that make freeskiing what it is today. We had the best time in the Czech Republic on Daniel Hanka’s home turf. Faction is an amazing brand and this film shows it.” 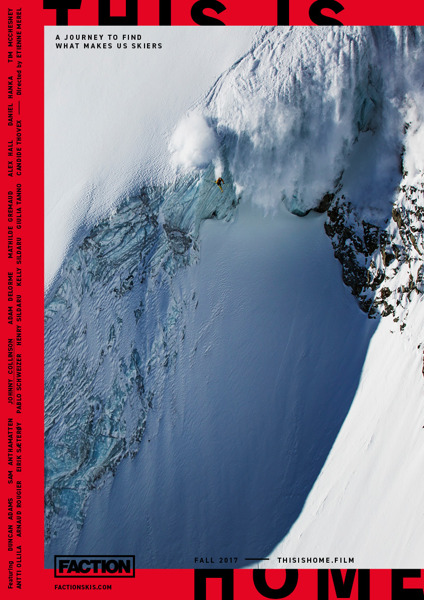 See More
THIS IS HOME Film and Tour Overview Deck