THIS IS HOME. A journey to find what makes us skiers.

THIS IS HOME is the first full-length feature film from the Faction Collective.

Tickets for media are available - we'd love to have you join us! Please let me know how many tickets you need and if you would like to meet with a specific athlete and/or the Faction team before the film.

Flyer and images for download here. Feel free to use images! Please credit "Faction Collective" and include the name of the photographer (in the file name).

Faction Skis, www.factionskis.com, designer and manufacturer of performance skis for the most demanding freeskiers, today announced the US Premiere of THIS IS HOME, a feature-length film that embodies freeskiing culture and showcases Faction athletes in their home mountains to discover the meaning of Home. www.thisishome.film

In production for the past year, THIS IS HOME chronicles what makes a skier, and tells personal stories about the environment that creates and the conditions that helped shape athletes including Candide Thovex, the world’s most famous and acclaimed freeskier, big mountain prodigy and SLC-native Johnny Collinson, 15-year old phenomenon Kelly Sildaru, and freeskiing icon Adam Delorme.

Filmed and produced by the team that delivered the award-winning “We Are The Faction Collective” webisodes, which received over 4 million views, the Faction production team has been on a year-long mission, from the icy streets of Finland to chasing powder in the Wasatch Range and exploring steep lines in Zermatt, and to visiting Thovex’s playground of La Clusaz and a rally session in Verbier.

“Every avid skier has memories about how they got hooked. I mean really hooked. I guess it's like an induction to a special tribe. After talking to the athletes on our team last year, we wanted to get to the core how these totally diverse people from different places all converged and seem to share a bond,” said Alex Hoye, CEO and Co-Founder, Faction Skis. “So we went on the road to the mountains - sometimes fields and streets - that shaped them. As the filming played out we realized that the message somehow evolved to the fact that home can be as much a feeling as any place. We hope THIS IS HOME feels like a homecoming for everyone who watches it.” 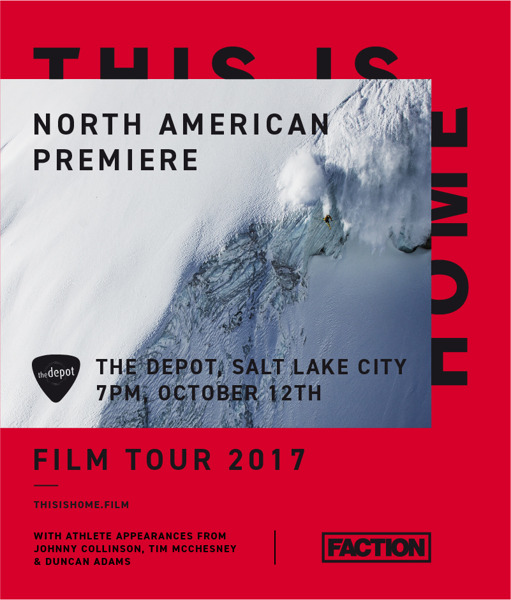 See More
Tickets for SLC Premiere of Faction's "This is Home"